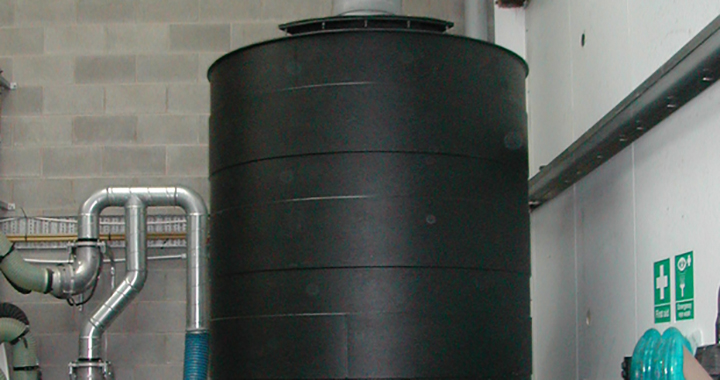 Simdean have recently installed and commissioned a VOC removal system on the exhaust air stream from a Solvent recovery plant based in Northern Ireland. The gas stream is extracted from the process at ambient temperature from both vacuum pump exhaust and general ventilation form around a solvent boiler.

The 3000 m3/h air stream is collected in various points from around the solvent boiler and is eventually combined into a single stream where it is fed via an exhaust fan to the VOC adsorber. The adsorber consists of a vertical cylindrical vessel in which activated carbon is retained between two perforated screens forming an annulus. Monitoring of the exhaust is possible via sampling ports to determine the operation of the system and life of the activated carbon.

The adsorber body has been raised above the floor level to allow for easy replacement of the carbon with outlet ports fitted which facilitate quick removal of the carbon from the adsorber during replacement. Simdean can produce single vessel carbon adsorbers for both odour and VOC control for flow rates up to 50,000 m3/h. and systems capable of treating up to 250,000 m3/h are available.

The adsorbers can be supplied either as modular units or complete prefabricated systems which include extract fan, particulate filter, ductwork with grilles and dampers, activated carbon and the canister. Simdean’s quality system meet the requirements of ISO 9001 and the adsorber and equipment are manufactured in accordance with appropriate design and construction codes. The principal codes followed include BS 4994, BS EN 12573 & BS EN 13280.